Alexander Millar is one of the most popular and collectable artists working today. His paintings hang in galleries and private collections all over the world and he is continuing to gain critical acclaim for the works he produces. 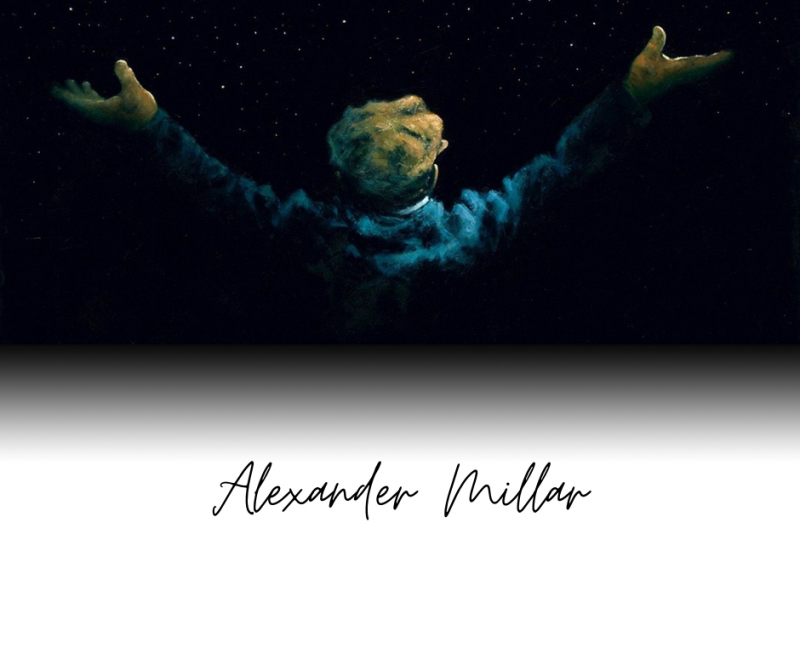 “What is admirable about Alexander Millar’s paintings is that they are the product of reference and invention, as the best art should be, and they broadcast a real and touching sentiment. I recognize immediately their intimate truths. We who lived our formative years in a Britain, a materially poorer but spiritually prouder one, still affected by the aftermath of the Second World War, won’t forget it. We can’t because the image of those times is burned into our mind’s eye.  The uniqueness of those city landscapes and horizons, dark and broken places hinted at in Millar’s work, has been largely erased from sight by boundless modernisation.”Millar’s childhood was spent growing up in the small mining community of Springside, situated between the two Scottish towns of Irvine and Kilmarnock.“

"Even though it was the 60s that I grew up in it felt more like the 40s,” comments Millar, “as the village seemed to be in some time warp stuck between the industrial revolution and Brig O Doon, and as with most wee places in Scotland, Springside had its fair share of “characters” most of whom I was related to in one way or another.”

Even as a child Millar was always fascinated by the small details he saw in everyday life. He would stand in awe at something as insignificant as an old man getting off a bike, a woman with bad hips struggling onto the bus, or the way a drunk would stand by the local pub negotiating a chip to land somewhere in the region of his mouth.”He describes it all as a street dance, produced for him only and made what seemed ordinary and mundane quite fascinating. “I guess that is the whole premise of the work that I produce in that I still take delight in turning the “ordinary” into something “extraordinary”.

The Best Man
Limited Edition on Paper Image Size 8.27" x 11.81"
RRP: £ 225.00
Tall Handsome Man
Limited Editions on Paper Image Size 9.84" x 13.39" and Canvas Framed Size 18.9" x 22.83"
RRP: £ 325.00
Taking Care Of Business
Limited Edition on Paper Image Size 8.27" x 11.81"
RRP: £ 225.00
Peaky Blinders
Limited Edition Paper Image Size 24.8" x 19.69" and Canvas Framed Size 29.53" x 24"
RRP: £ 495.00
Making His Mark
Limited Edition on Paper Image Size 8.27" x 11.81"
RRP: £ 225.00
Heaven Can Wait
Limited Edition on Paper Image Size 11.81" x 14.96"
RRP: £ 325.00
Double Trouble
Limited Edition on Paper Image Size 8.66" x 11.81"
RRP: £ 225.00
Bonnie Lad
Limited edition Giclée on Paper Image size 11.81" x 14.96"
RRP: £ 325.00
Under My Umbrella
Limited Edition Paper Image Sizes 15" x 18.8" and 9.4" x 11.8"
RRP: £ 200.00
Two Under Par
Limited Edition on Paper Image Size 15" x 18.8"
RRP: £ 395.00
He's Fitba Crazy
Limited Edition on Paper Image Size 9.84" x 11.8"
RRP: £ 195.00
Again, Again, Again (Boutique)
Limited Edition on Paper Image Size 20" x 13.3"
RRP: £ 445.00
The One That Got Away
Limited Edition on Paper Image Size 9.84" x 11.8"
RRP: £ 195.00
Heading Home
I always remember a kind of stillness around the evening time we would be heading home for the night.
RRP: £ 195.00
The Sun is in my Heart
Inspiration for The Sun is in My Heart came to me when I recently bought a methylated spirits stove from a camping shop in Newcastle. I took a drive
RRP: £ 195.00
Tee 4 Three
If I ever saw my dad fixing to go anywhere, whether it be fishing or playing a round of golf, I was always pestering him to join in. This image
RRP: £ 395.00
Pitch and Putt
Every golfer I know cut his or her teeth on the local pitch and putt course and I personally would spend a huge amount of time at the one in
RRP: £ 395.00
Say It With Flowers
The one thing I wish I had seen more of in my family as a wee boy was us being a bit more demonstrative in our affections.
RRP: £ 200.00
Mams, Dads, Aunties and Uncles
Whether with blood relatives or friends of mam and dad, who we called aunties and uncles back then, any excursion became more of an adventure –
RRP: £ 550.00
Mam
One of the most precious things that my parents gave to me was an old leather suitcase of photographs that has been in the family from generation to
RRP: £ 200.00
Lollipops and 99's
Limited Editions on Paper Image Sizes 23.2" x 9.8 (small) and 30.2" x 15.5" (large)
RRP: £ 395.00
Hopes and Dreams
As far back as I can remember I’ve always loved balloons. When the rag and bone man came around the village asking for people to throw out their
RRP: £ 200.00
Family
With so much change and division in the world at the moment, there’s a natural desire to hanker back to simpler times when the family provided
RRP: £ 445.00
Fairway To Heaven
This image makes me think of the time before we had the likes of golf buggies and golf carts to ferry us around the course, when the task of carrying
RRP: £ 395.00
Happy Days
The wonderful thing about having been brought up in that little mining village of Springside on the west coast of Scotland was that the people or
RRP: £ 200.00
Everyday Hero
When the uniform has been laid aside and the helmet hung up, the real man or woman steps out and often appears the unassuming everyday citizen in the
RRP: £ 395.00
Dad
The person in the family that I saw the least of was my father. I guess this was the case in most families back in the day as practically all our
RRP: £ 295.00
A New Day Dawns | Crail Harbour
Growing up in the west of Scotland, with the weather coming off the Atlantic, the east coast of the country seemed a strange and foreign land, rarely
RRP: £ 495.00
After The Storm Crovie
An alternative view of the Aberdeenshire fishing village of Crovie. Cut off from its hinterland by very steep hills and cliffs, there is only one
RRP: £ 495.00
Eileen Donan Castle
My love of Scottish history has been influenced by various visual interpretations of my nation’s story through paintings, films and TV. So it’s
RRP: £ 636.00
Evening Light Crovie
When I was a wee toe rag, my family were never the adventurous types. However, one day my dad decided to take the whole family up to a tiny village
RRP: £ 495.00
Gathering Clouds
Although only 15 miles or so away from Alexanders' home, a day trip to the Ayrshire coast was a great adventure. Seaside resorts with beaches,
RRP: £ 495.00
Glencoe
Glencoe is deep in the psyche of Scots at home and abroad. The scene of a tragic episode in a civil war, the name of this famous glen conjures up
RRP: £ 495.00
King of Queens
The setting for this painting may be familiar to those who have seen the Woody Allen film Manhattan, viewed from the iconic park bench at Sutton
RRP: £ 530.00
Shadows and Dust
"A good description of our mortality for we all end up as those two things once we breath our last but it was a line from the film Gladiator
RRP: £ 450.00
Under a Northern Sky
This was the first painting Alexander did for his series of new works and when he’d finished it he felt like it was taking him on a new journey
RRP: £ 450.00
Copyright © Portfolio Fine Art 2018 - 2021
Website by DSM Design Ltd.
Loading
Please correct the following errors :
We use cookies to personalise content and to analyse our web traffic.
OK
Manage your cookies
Essential site cookies
Google Analytics